How do you know if a skin growth is a wart?

There are more than 100 types of Human Papillomavirus (HPV) that can cause different warts. Warts come in varieties, with their characteristics vary based on types of warts.

Learn how to recognize wart, while always consult a healthcare provider to be sure you actually have a wart and not some other ailment. A doctor can diagnose wart based on visual examination, and take a tissue sample or biopsy to determine the exact diagnosis when necessary.

If you find the image below is educational and helpful – please share it out, would you? 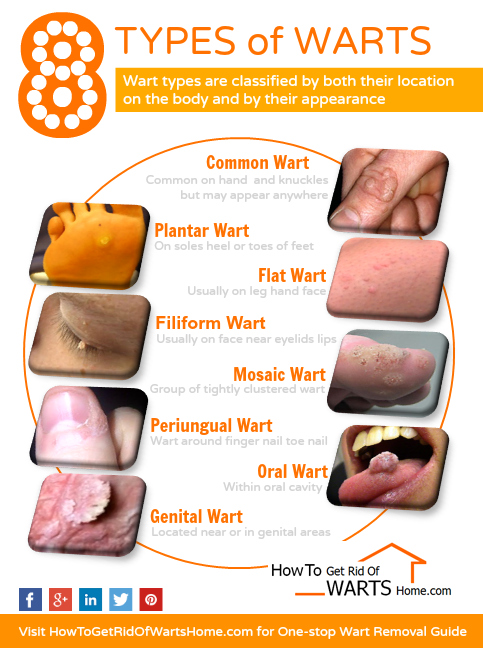 The characteristics and symptoms of HPV warts, depends on wart type, can include:

Warts come in varieties, with their appearance usually determined by where the wart is located, as different HPV virus tends to infect different part of the body.

Learn how to recognize different types of wart, while always consult a healthcare provider to be sure you actually have a wart and not some other ailment. A doctor can diagnose wart based on visual examination, and take a tissue sample or biopsy to determine the exact diagnosis when necessary.

The characteristics and symptoms of warts depend on type of warts. There are 8 categories of viral warts in general, usually classified both by their location on the body and by their appearance:

Common wart, also known as seed wart, appear most often on the hands and can be easily recognized by the rough, cauliflower-like appearance of the surface. Common warts may appear anywhere on the body, but are more common on the knuckles, fingers, and elbows. These warts on hands and fingers are thickened bumps called papules or plaques. They may have tiny black or dark dots which are clotted blood vessels, and not the actual wart “seed”. Common warts tend to cause no discomfort unless they are in areas of repeated friction or pressure.

Plantar wart located on the soles of the feet, sometimes on the heel and toes. These warts on feet look like hard, thick patches of skin with dark specks, usually grow back into the skin because the weight of the person pushes onto the sole of the foot. Plantar warts, also known as foot warts or verrucas, can be painful especially when present on weight-bearing areas of the foot like walking. It is common for plantar wart to have clotted blood vessels appearing as black dot in the middle, with a surrounding hard, white area.

Flat warts, also called plane warts, are flat, smooth, and normally round shape. They are generally yellowish, brownish, or skin color. Plane warts are also known as juvenile warts, probably because they are seen most often in children. They usually found on the on the face, hands, neck, or legs, and tend to grow in significant numbers of 20 to 100 all clustered together at a time, according to the American Academy of Dermatology.

Filiform warts, also known as facial warts or digitate warts, are benign growth that can appear as an individual wart or in a group or cluster that look like thin long threads and flesh colored. They are projected onto the skin’s surface from underneath the skin, and typically occur on the face, at the base of neck, near the eyelids and lips, or armpits. The symptoms of filiform warts on face include itching, and bleeding from irritation e.g. when they are rubbed on clothing accidentally.

Mosaic wart is usually a group of plantar warts tightly clustered together in a small area, often due to warts left untreated and grow to an inch or more in circumference and spread into clusters of several warts. They often develop on the palms of the hands which are also known as palmar warts, and on the soles of feet.

Periungual wart, also known as Subungual wart, is wart under or around the toe-nail and finger-nail as raised, rigid, cauliflower like structures. Wart under the nail should be treated, as it can cause a lot of pain due to their location and the pressure exerted on them, while Subungual wart may damage the cuticle / nail-bed and deform the nail if the wart left untreated and continue to grow big enough to detach the nail from the nail-bed.

Oral warts are abnormal raised bumps that appear on the lips or anywhere within the oral cavity including root of mouth, tongue, gums, inside the cheeks, and throats. Appeared as single lesions or in a cluster with other lesions, the mouth warts normally have rough surface, appear slightly more red or white than the adjacent healthy tissue. Oral warts, though rarely painful, may cause discomfort that makes eating and swallowing difficult.

Genital wart is wart that is located near or in the genital areas. Genital warts are often also called condylomata acuminata, anogenital warts, anal warts, or venereal warts. This type of warts, considered to be the most common sexually transmitted disease (STD), look like flesh-colored or grey or off-white lumps with a grainy ‘cauliflower’ appearance. Since genital wart is sexually transmitted, the penis, vulva and anus are most commonly affected. Genital warts are not always visible to the naked eye, so people with genital warts may be unaware that they have them and that the infection can spread without their knowledge.

There is a common myth of warts that they have root which can grow deep into the tissues and attach to the bone, which is not true.

Some people thought the black or dark dots on the HPV wart are wart roots, such as “plantar wart root”. Indeed, they are actually clotted blood vessels that have dried-up. They only grow in the epidermis, the outermost layer of skin.

Warts do not have “roots” or “seeds”.

However, there are much debate on this. Check out the expert roundup post answering “Can Warts on Hand Spread to Genital?”.

As the strains of HPV that cause cancer are different from those that cause wart, warts themselves do not pose danger to health and will usually vanish on their own as HPV is cleared by the immune system in most cases.

Some people may worry that their genital warts will become cancerous, but having genital wart virus infection does not mean you will get cancer, as genital warts are caused by low risk HPV (e.g. HP-6 and HPV-11) that are not the same strains of high risk HPV, such as HPV-16 and HPV-18 that cause cervical cancer.

However, infection that last for many years, especially the untreated genital warts and oral warts, may increase a person’s risk of developing pre-cancerous conditions and cancer warts. As such, warts treatment (and regular Pap smear screening test) should be done.

How Long do Warts Last?

Many warts go away without treatment and this, varying from person to person, could take anything from months to 2 years or longer period depending on how long it takes the body’s immune system to fight and suppress the HPV virus.

As mentioned earlier, there is no cure for HPV virus itself despite HPV treatment is available for the health effect that HPV can cause, such as warts. In the case that the warts are treated or removed, you may still have the HPV virus in your body and stays in the skin, thus wart keeps coming back is a possibility especially if your immune system is weak.

Seborrheic Keratosis and Molluscum contagiosum are not related to warts caused by Human Papillomavirus HPV.

Seborrheic Keratosis, sometimes called “seborrheic wart” or “senile warts”, are common harmless skin lesions that appear in adulthood usually after the age of 40 years, due to a buildup of ordinary skin cells. Seborrheic means greasy or oily, and keratosis means thickening of the skin. Seborrheic Keratosis often appear as a slightly raised brown or yellow growth on the back or chest, have a waxy look, and looked as if they were pasted on the skin. While the actual cause of seborrheic keratosis is unknown, research shows seborrheic keratosis do not contain HPV viruses that cause warts, while they tend to run in families and seems related to sun exposure.

The Takeaway… What Next?

Wart, caused by Human Papillomavirus, can appear anywhere on the body.

Come in varieties, warts are generally categorized into 8 different wart types, classified by their location on the body and their appearance. Refer the image at top of this page to refresh your learning, and share the knowledge around to help people around you.

Warts are not cancerous, as warts are caused by low risk HPV that are not the same strains as high risk HPV that cause cancers (such as cervical and penile cancer). However, untreated warts that last for many years may increase risk of developing precancerous conditions and cancer warts, thus warts treatment should be done.

To win the war of warts, below are highly recommended reads for you to learn more: 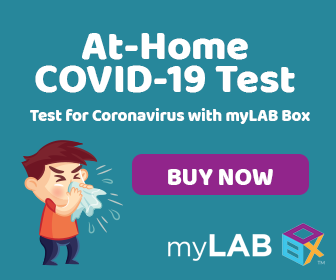